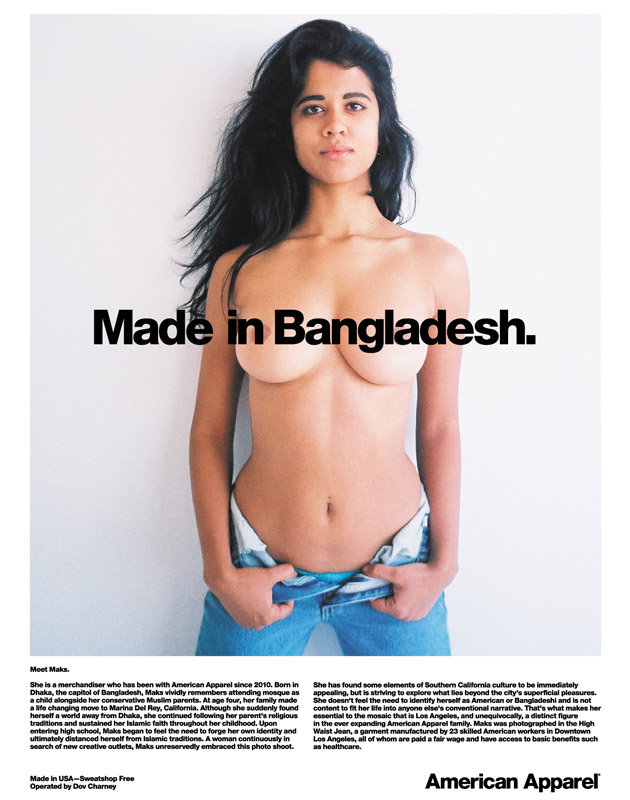 Let’s get one thing clear, I do not hate American Apparel clothes. In fact, I actually really like their silky vintage-feel shirts and glitzy leggings (hey I was born in the 80’s give me a break), but God do I have issues with the way they market themselves. The controversial clothing manufacturer has been called into question on numerous occasion for their risque use of female models, and the gender biased styling of their unisex clothing (sure, man wears bomber and jeans, girl wears bomber and thong, right?).

The campaign that’s currently sparking debate is entitled “Made in Bangladesh” and features Maks, a former Muslim girl born in Dhaka and raised in southern California. To accompany Maks’ boobs and high-waisted jeans (worn unbuttoned to show off some crotch, I know that’s how I like to wear my denim), there is some text relaying A.A’s “Made in America” ethos: “Maks was photographed in the High Waist Jean, a garment manufactured by 23 skilled American workers in Downtown Los Angeles, all of whom are paid a fair wage and have access to basic benefits such as healthcare”. Unlike Maks, these jeans were made on home soil where life is good and fair, and we can show our boobs if we so please.

Meanwhile, back in Bangladesh, where rival brands produce their garments, working conditions are poor. Tanwi Nandini Islam on Elle.com commented that “this is what our fantasy of what Made in Bangladesh looks like. Not a poor, underpaid, overworked young woman making you a $5 shirt for 30 cents an hour.” Now, I agree that poor working conditions in textile factories is inexcusable, the Rana Plaza disaster that killed over 1000 workers in 2013 highlighted the necessity for fixed minimum wages and improved working environments in the industry, but as Muhammad Yunus points out, there is no sense in foreign firms “leaving a country which has benefited a great deal from their business”.

Yes, Bangladesh’s textile industry, is the nation’s number one export earner, accounting for 80% of Bangladesh’s exports. The industry employs nearly 3.5 million workers – 1 million of them are women. While it can be argued that women working in the garment industry are subjected to unsafe labor conditions and low wages, they still give women in Bangladesh the opportunity to earn their own wages. But wait, let’s get back to the issue at hand. What do Bangladeshi working conditions have to do with tits?

The answer is nothing. Nothing at all.

A.A actively promotes their commitment to paying their workers far above the industry standard (50 times more to be exact), but job satisfaction levels aren’t exactly sky-rocketing. CEO Charney has been accused of sexual harassment and assault on multiple occasions, taken to court for throwing dirt at an employee and calling him a “fag” and “wannabe Jew” and has reportedly fired store workers for being “ugly” (oh, and for having cancer and being black too). Its not plain sailing back at the factories either, a garment worker was killed by a circular knitting machine at a factory in 2010, and A.A was forced to fire 1800 employees after a federal audit unveiled irregularities in the documents immigrant workers provided in order to get hired. A.A are right, working for them is far better than a Bangladeshi sweat-shop, but I’m not about to prep my CV.

But let’s return to Maks, our former Muslim pin-up. Goodbye burka hello boobies – wow, what an inspiration. I’m sure all those girls back home, fighting for the right to education are thinking “good old M-dog, look at her doing it for us girls!”. American Apparel’s Creative Director explains that ads like this are a celebration of “women, diversity, healthy body image and female empowerment”, but I’m a female and I don’t feel empowered at all – do you? 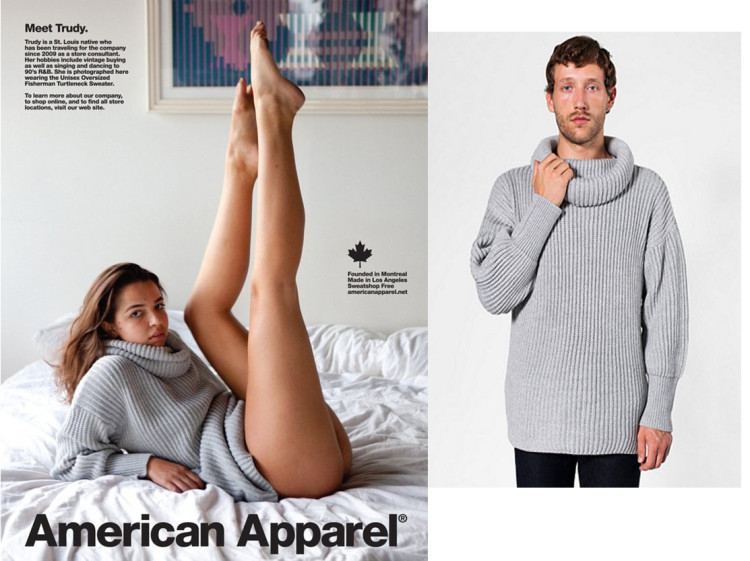