God bless Hunter Gather. Their 10.30am show on Sunday morning was accompanied by a tasty breakfast buffet, including smoked salmon bagels, granola, and some toxic looking charcoal cleanse drinks. I avoided these. My body is no temple. 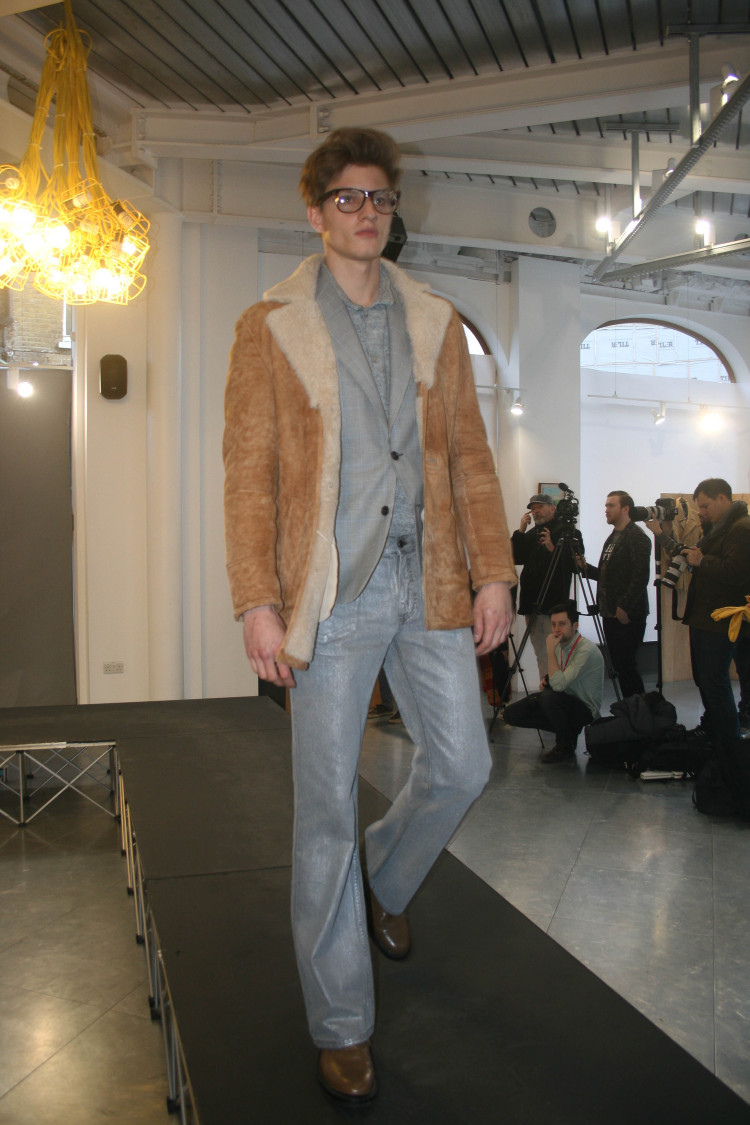 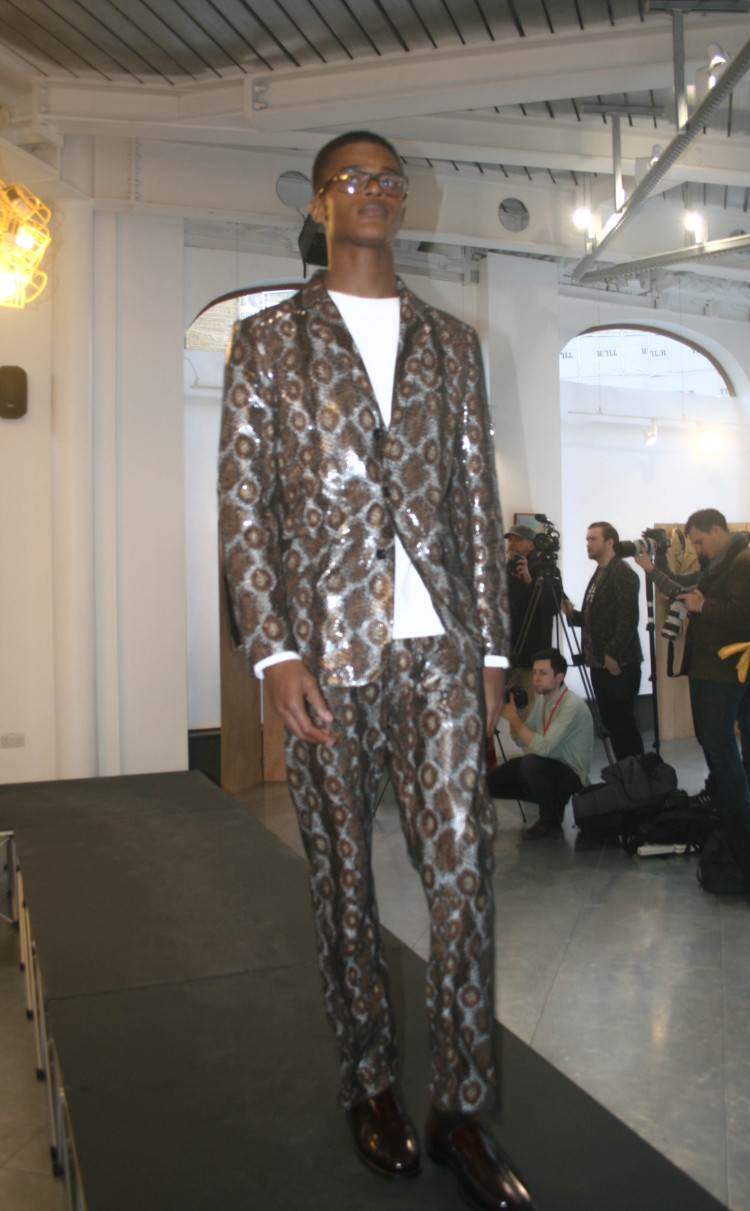 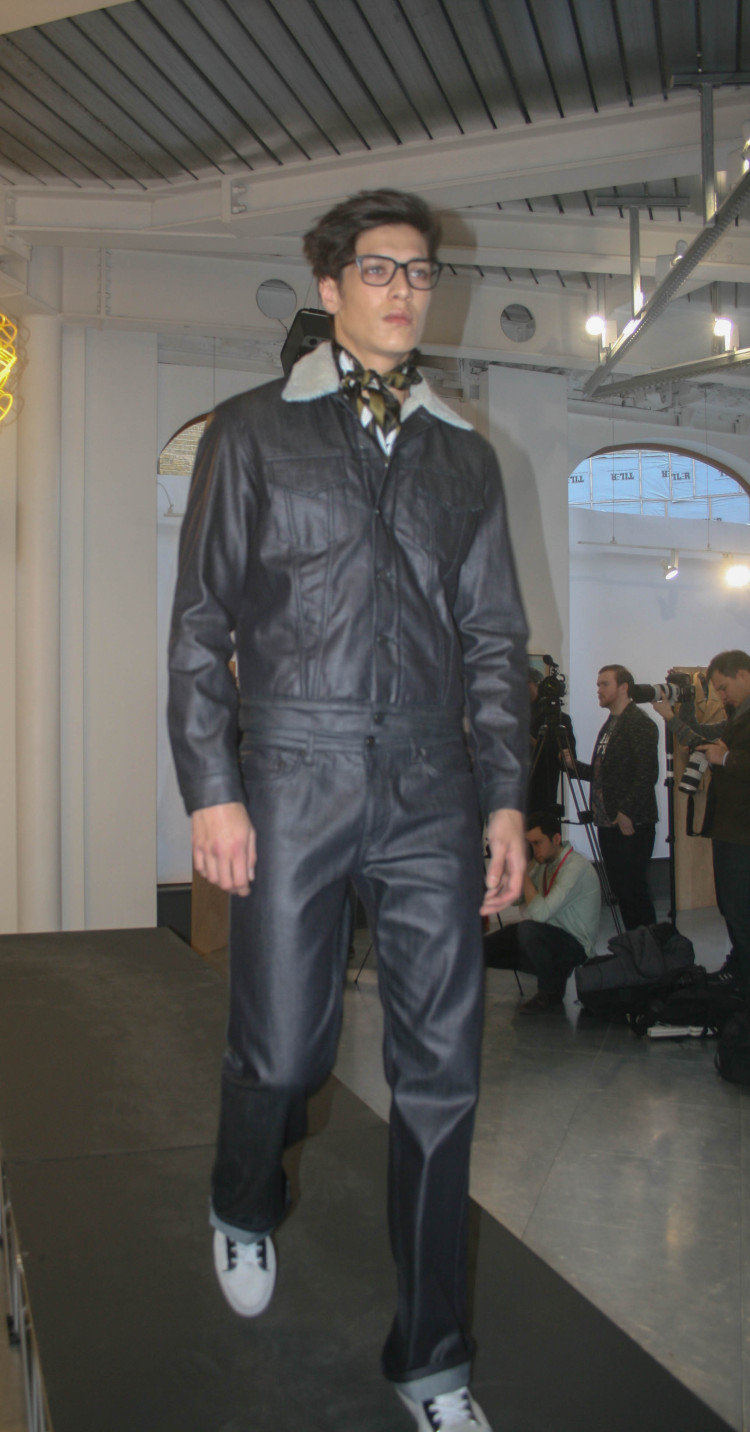 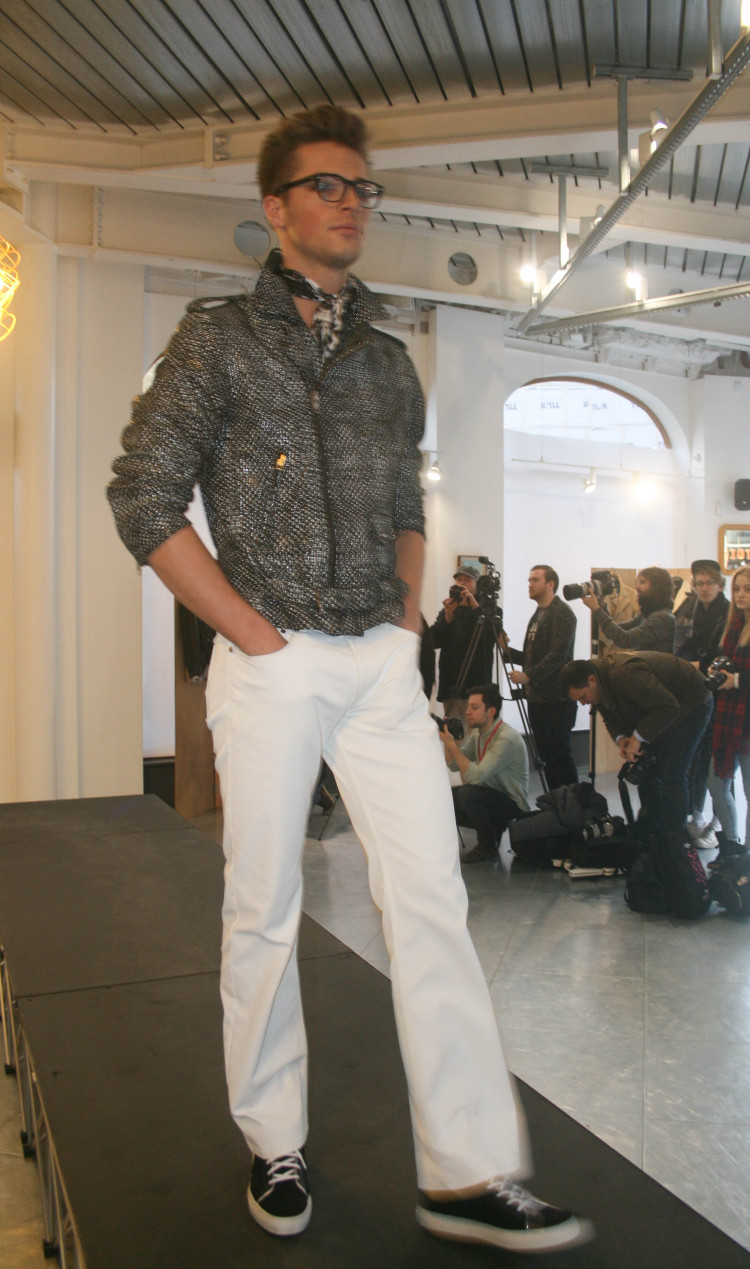 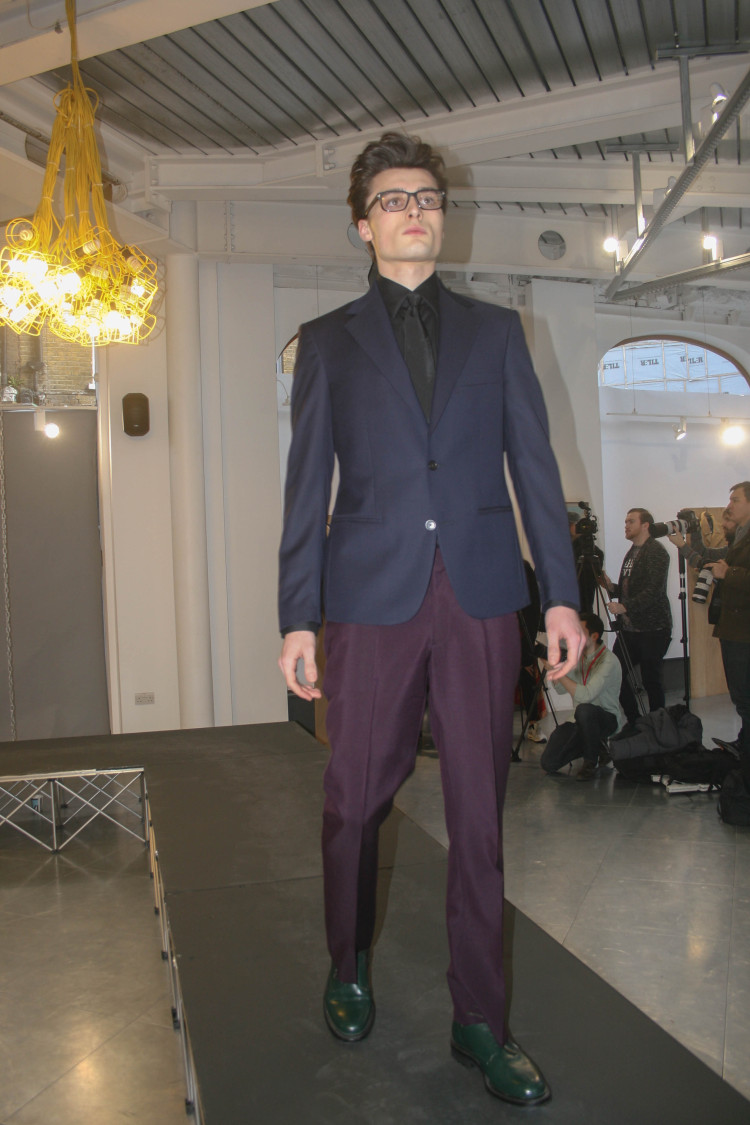 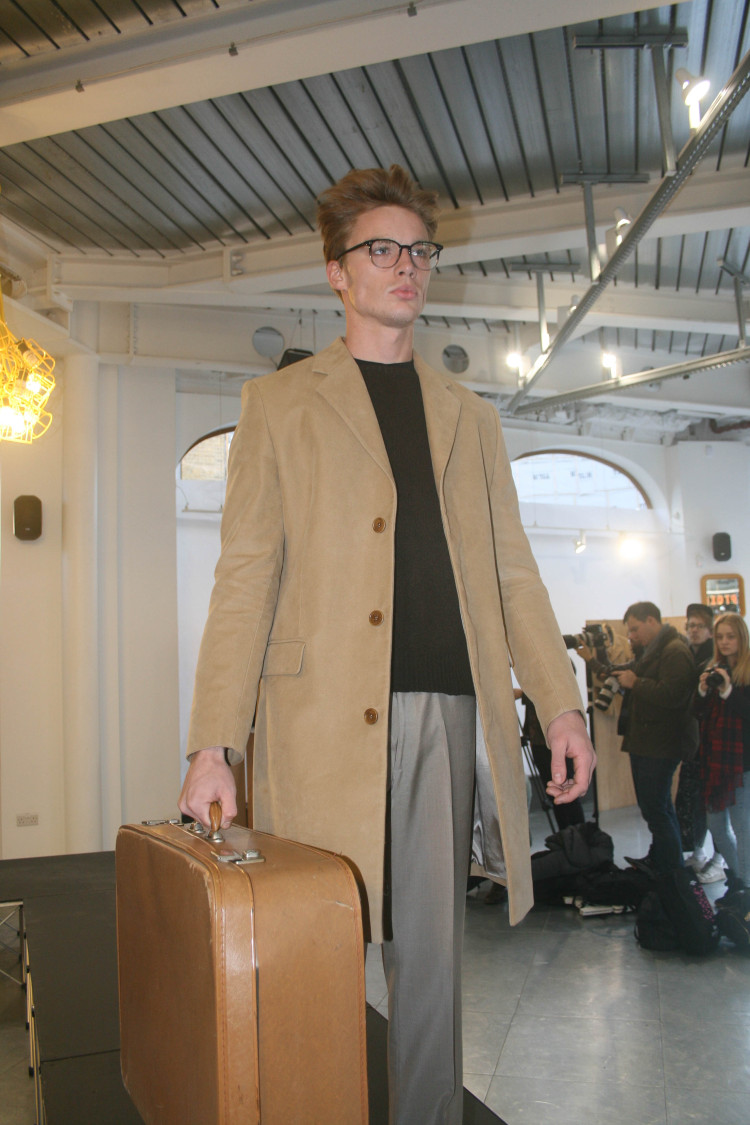 The aesthetic was firmly ’70s, with flared, shimmering denim jeans and longline shearling jackets (there’s that shearling again). The music was appropriate to theme, with James Taylor playing over the show. I was a big fan of the slightly camp snakeskin biker.

Later that day was my favourite show of this season: James Long. Long’s designs are exciting; there is no other word for it. 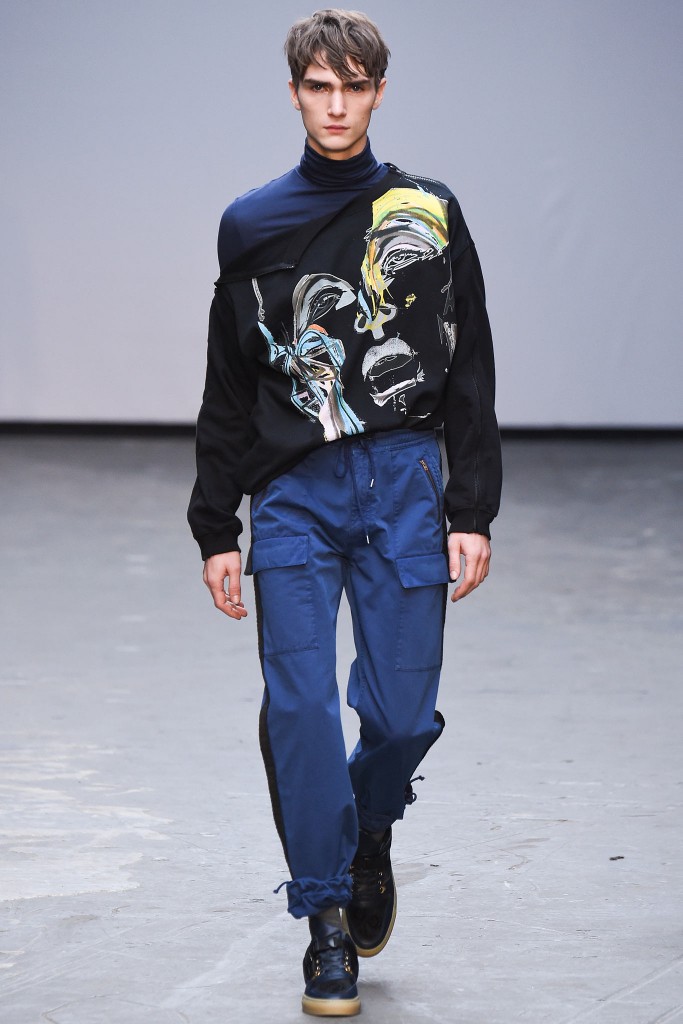 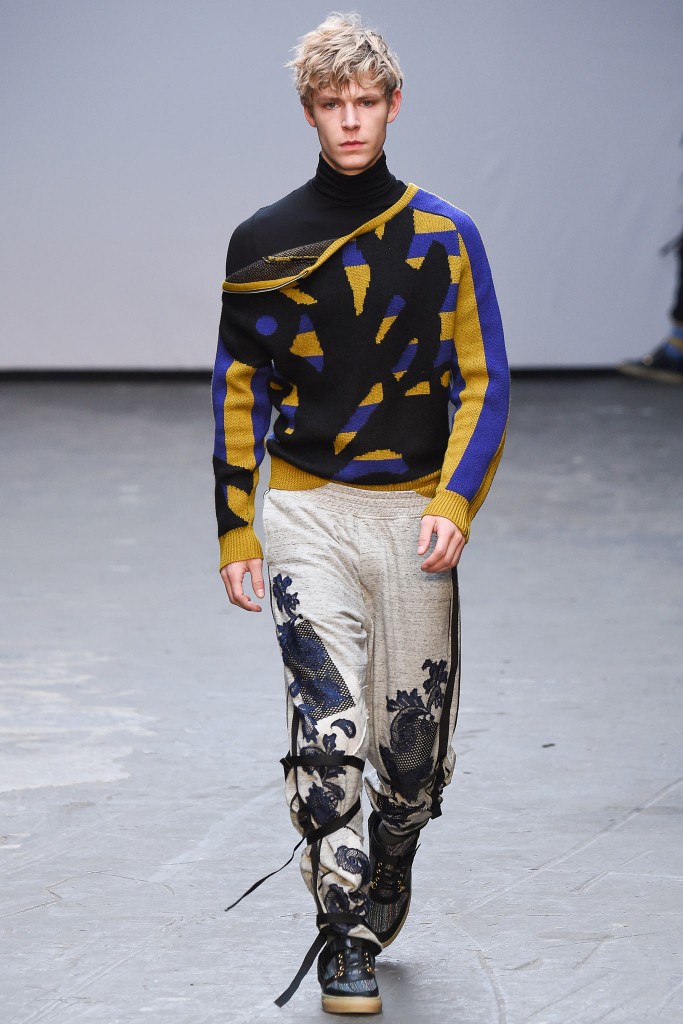 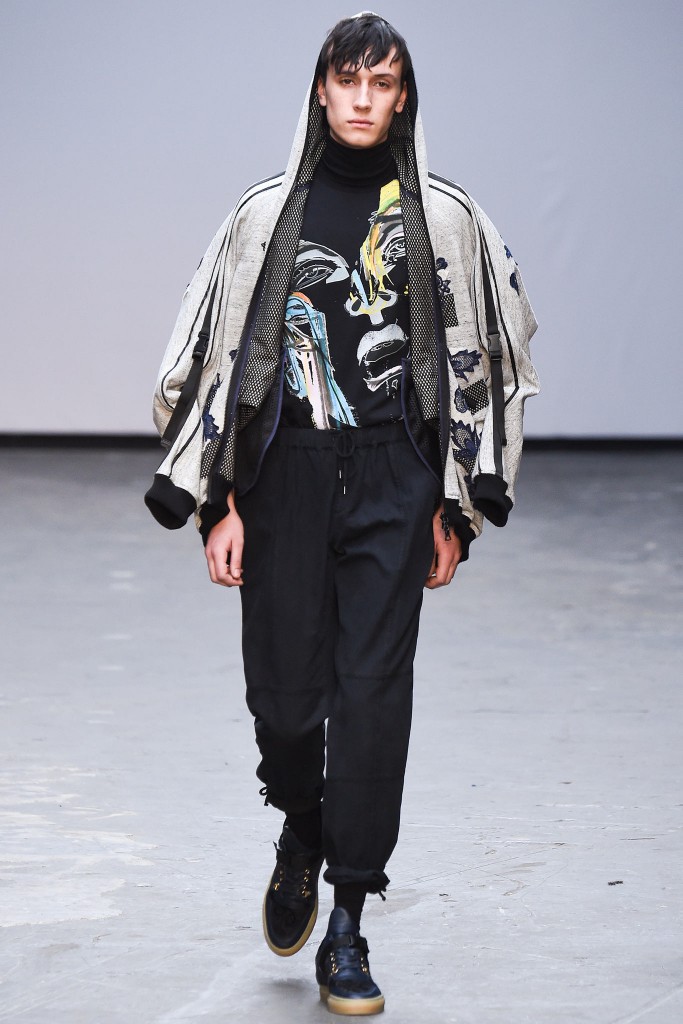 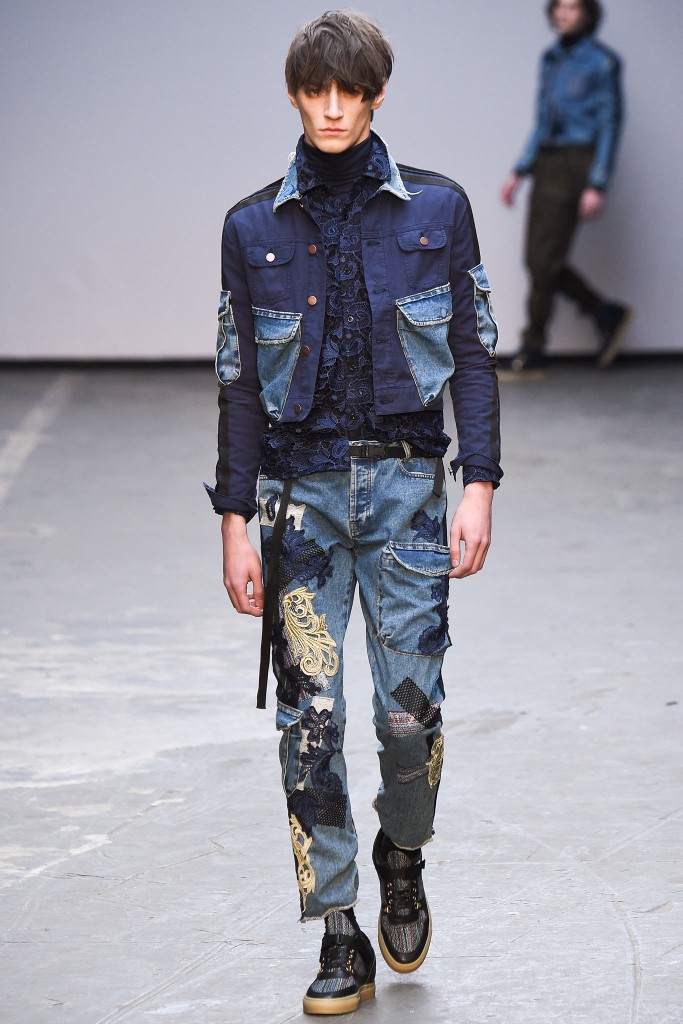 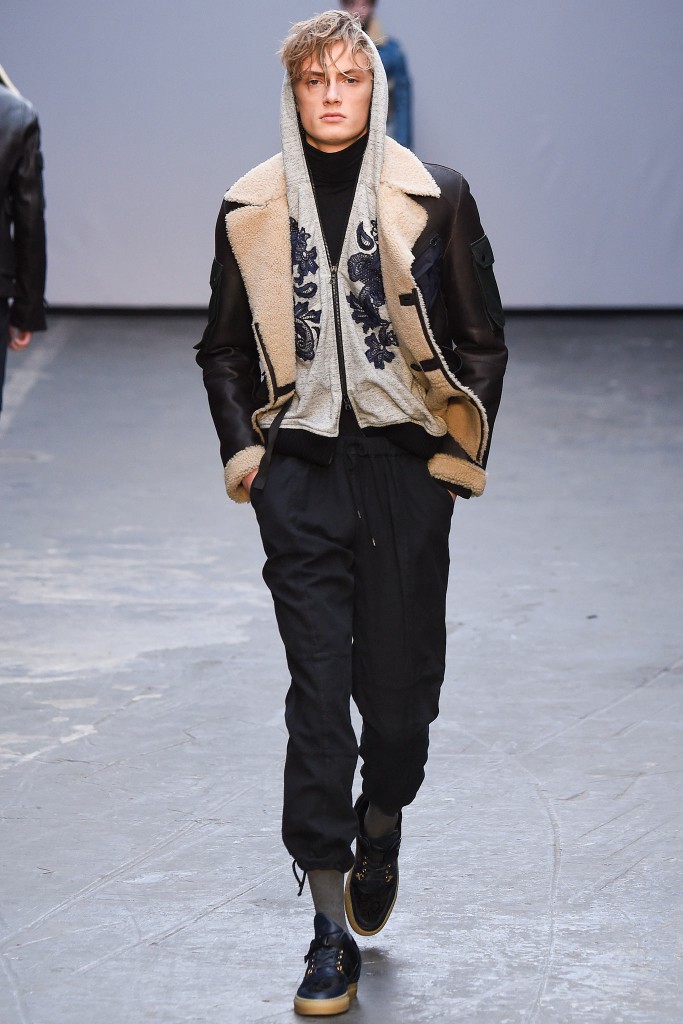 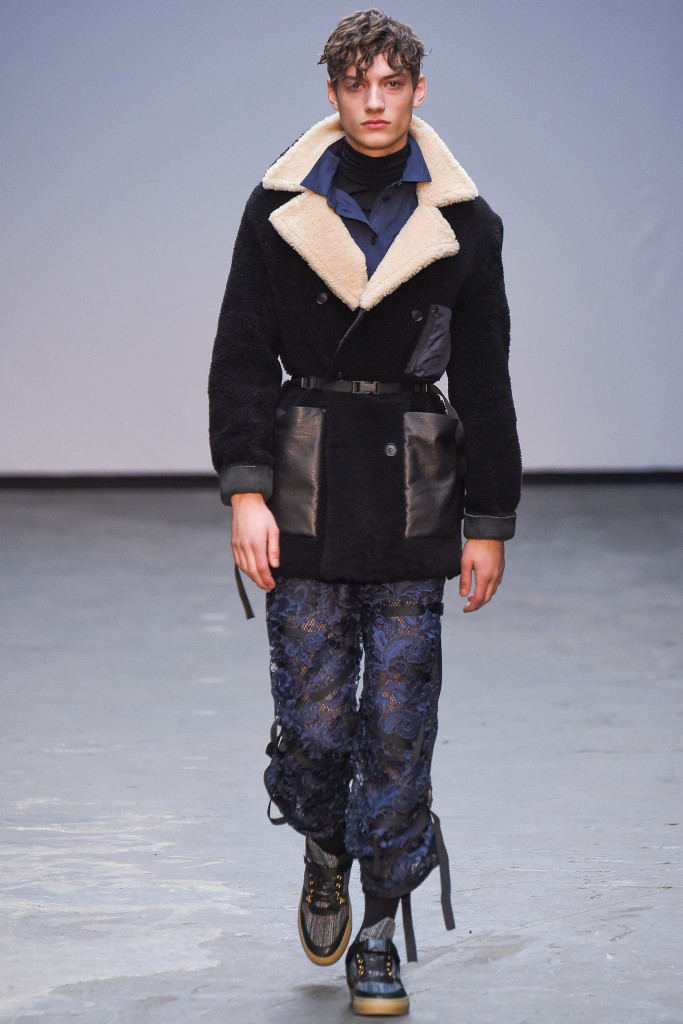 Long took a ‘mixed media’ approach to his latest collection, combining unusual materials such as jersey and lace, and deconstructing the lot before putting it all back together with straps and hoods. The denim was distressed, the capes were flowing and the theme was largely blue and grey. And yes, the shearling bomber made another appearance; this time with a lacquered finish. The fleece pockets were an unusual touch, and the whole runway was incredibly tactile.

Later, I was privy to CMMN Sweden’s installation in the BFC Show Space. More obviously than with Soulland, there was a football vibe – the show opened with recorded commentators bellowing over the speakers, and harsh floodlights illuminating proceedings. The models took a lap around a circular, rotating stage made of astroturf, before climbing atop it to display their clothes. 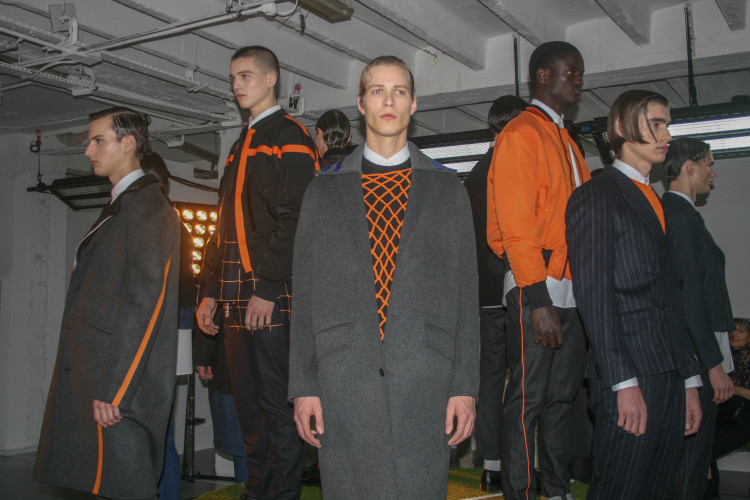 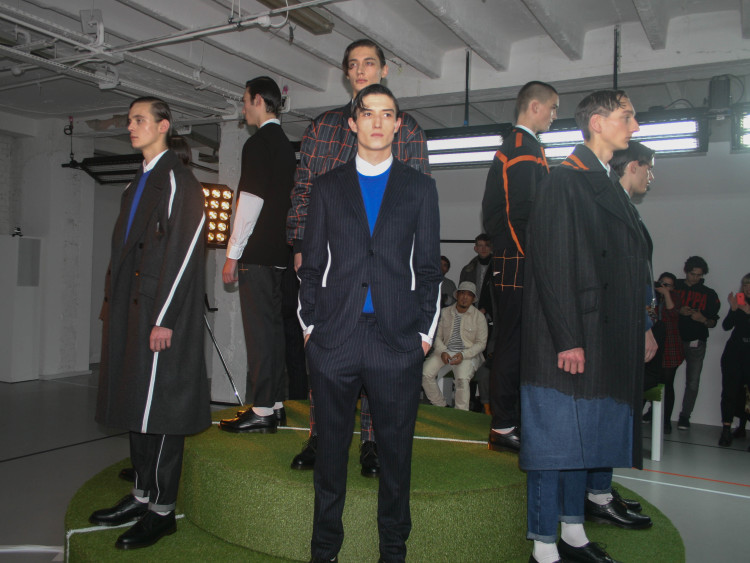 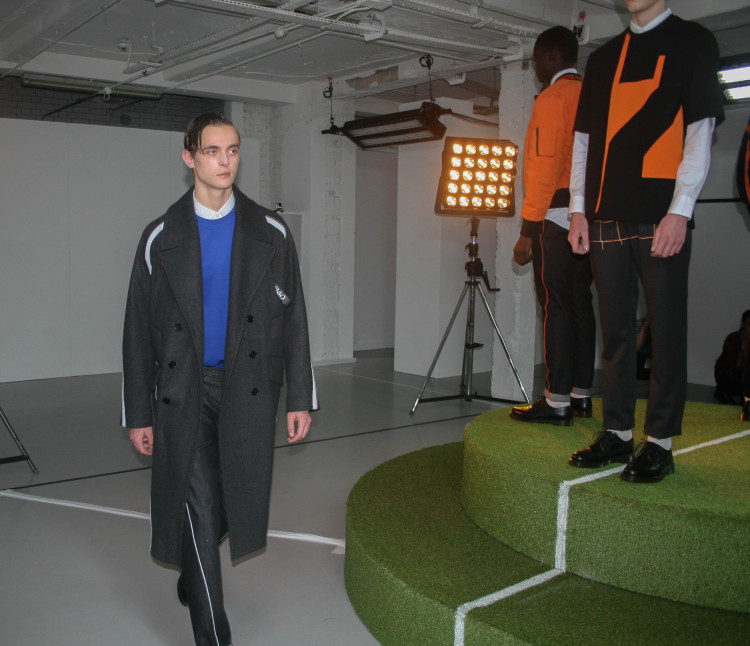 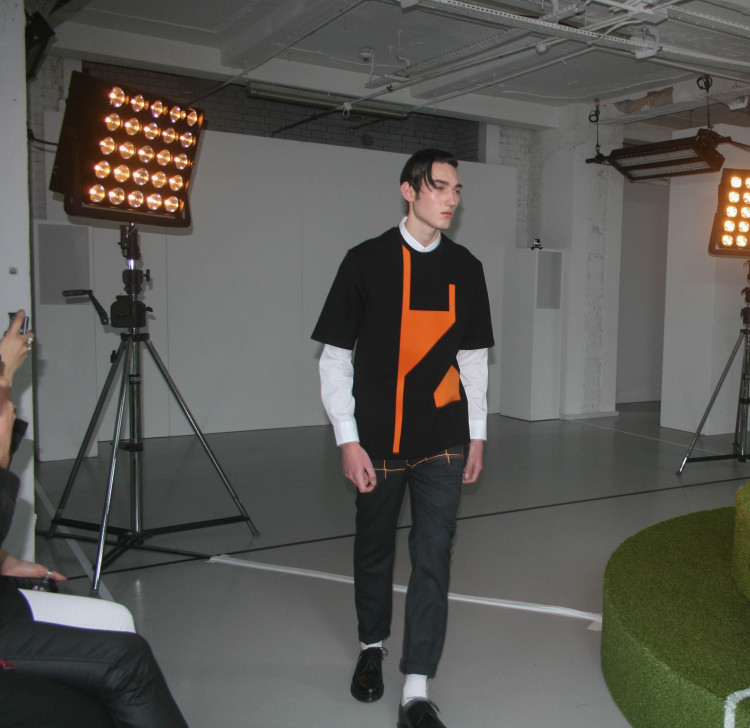 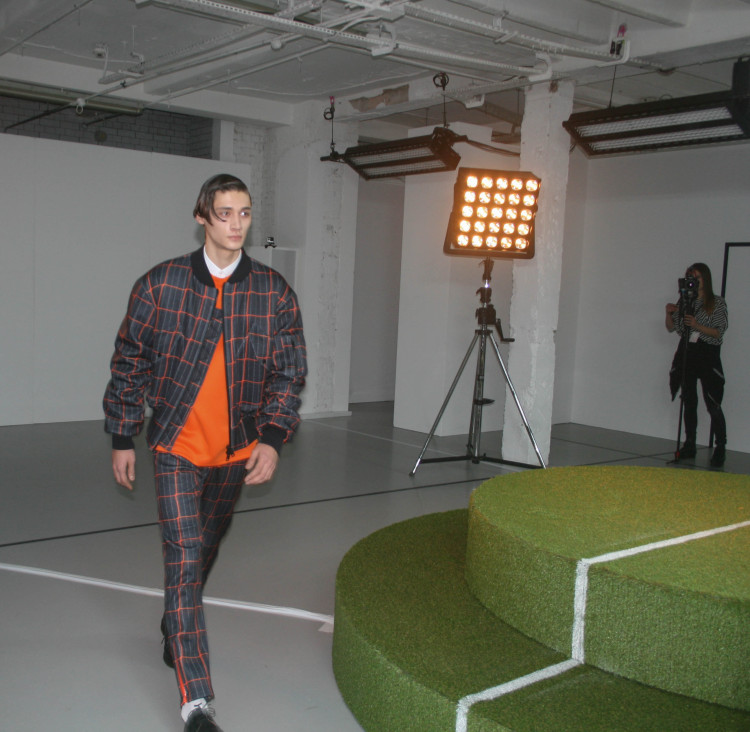 The goal net was a feature that ran through the designs, with one model’s jumper featuring an orange net overlay. The suits had go-faster stripes down the leg, and the bombers had huge, graphic numbers printed on them. The look was finished off with teddy boy brogues, as loutish chants played over the show.

Finally was Tiger of Sweden. Sophia has a great relationship with this label, and thus I had a second row seat – jammy. 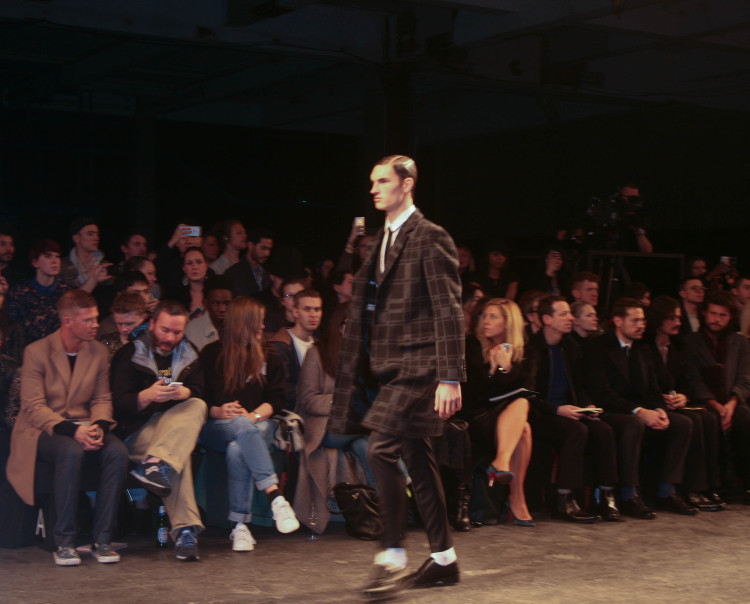 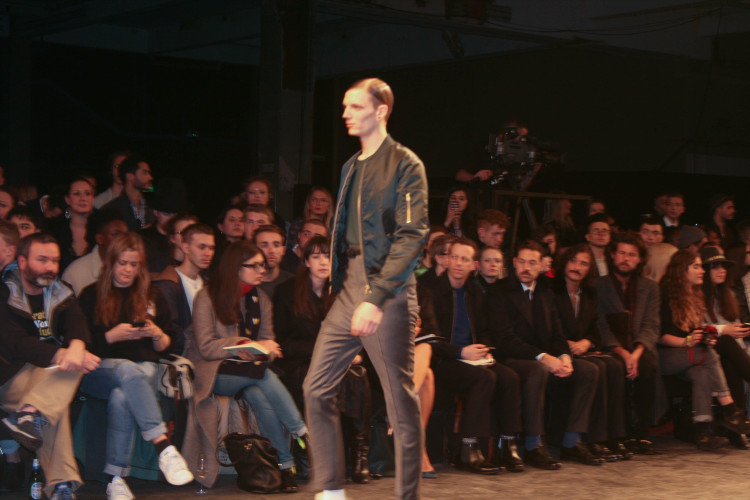 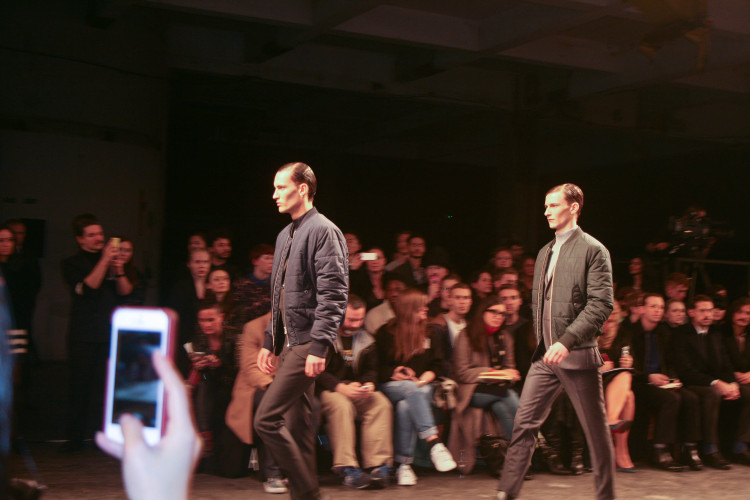 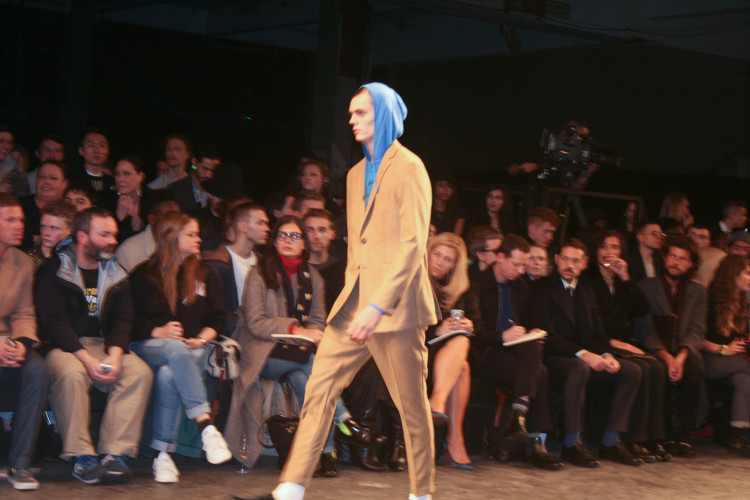 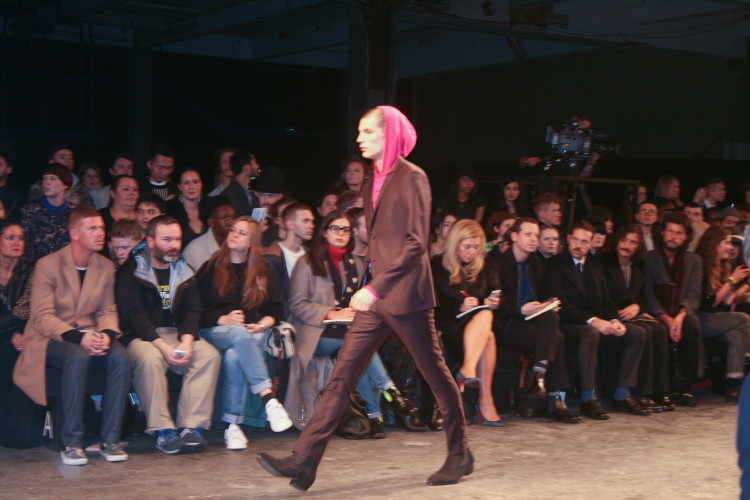 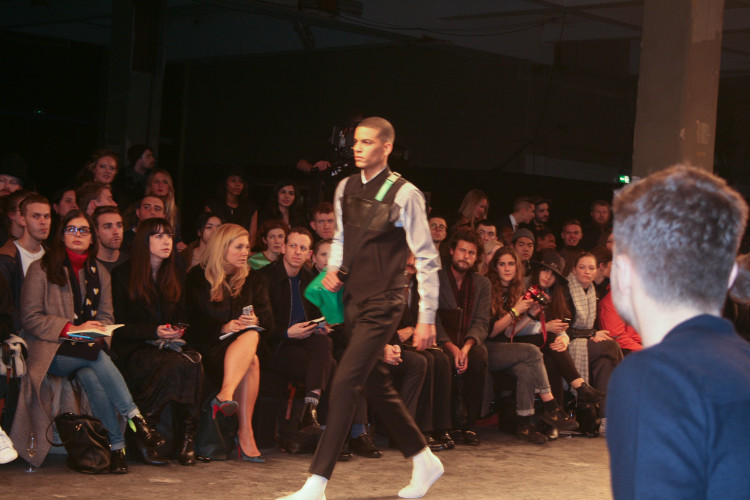 This season, the suit designers took inspiration from the German electronica band Kraftwerk, and the bleak landscape of 1970s Britain. From this dark economic time sprung minimalist, synth driven pop music, and with it a whole new way of dressing. The models’ hair was slicked down, Bond villain-style, and their trousers were cut high-waisted and tapered to the ankle. The bomber reappeared, as did the hood. The show was slick and polished, and stayed faithful to the parameters the designers set out for themselves in the press release. A climactic end to my time at LC:M.

I have had a fantastic, exhausting weekend representing Girl in Menswear at LC:M, and I hope you have enjoyed seeing what I saw. Until next season…