When I told friends that I was headed to Morocco for a holiday, I was granted a rather mixed response. Some people raved about the country and others, well, let’s just say, not so much. My verdict? I loved it. 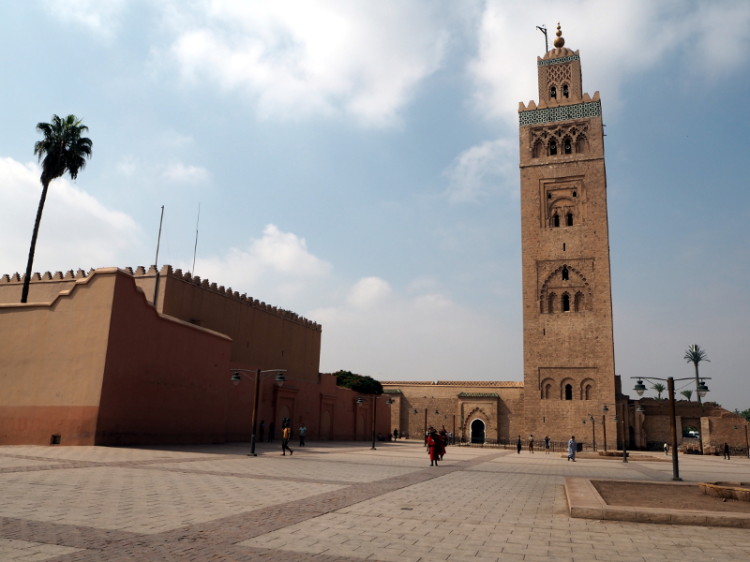 Marrakech is an assault on the senses. The walled Medina runs a 19km perimeter that marks the old city. Within these ancient walls are meandering souks, palatial riads, grandiose museums and mosques that chant the call to prayer five times a day. Outside of them is the new city – golf clubs, luxury hotels, shopping malls and Ibiza style bars. Marrakech is a city of contrast. Of old meets new, and it operates at an insatiable pace that’s invigorating, if not at times, a tad overwhelming. 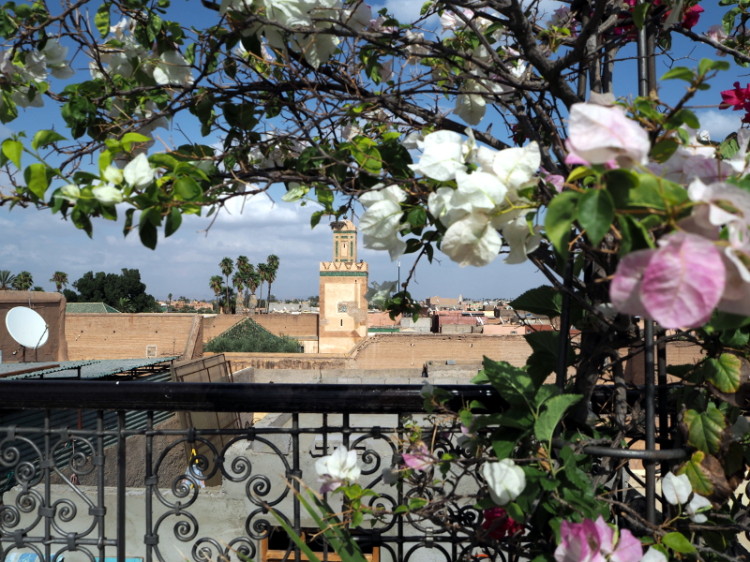 I spent three nights at the Riad Assakina, an oasis of calm a stones throw away from the Bahia Palace. I can’t rave enough about this accommodation. It’s luxurious, yet unpretentious, with spacious rooms and a beautiful courtyard equipped with a small swimming pool. The jewel in this riad’s crown is the roof terrace, a two tier outside space that affords views of the city and the perfect spot for relaxation after a full day on your feet. 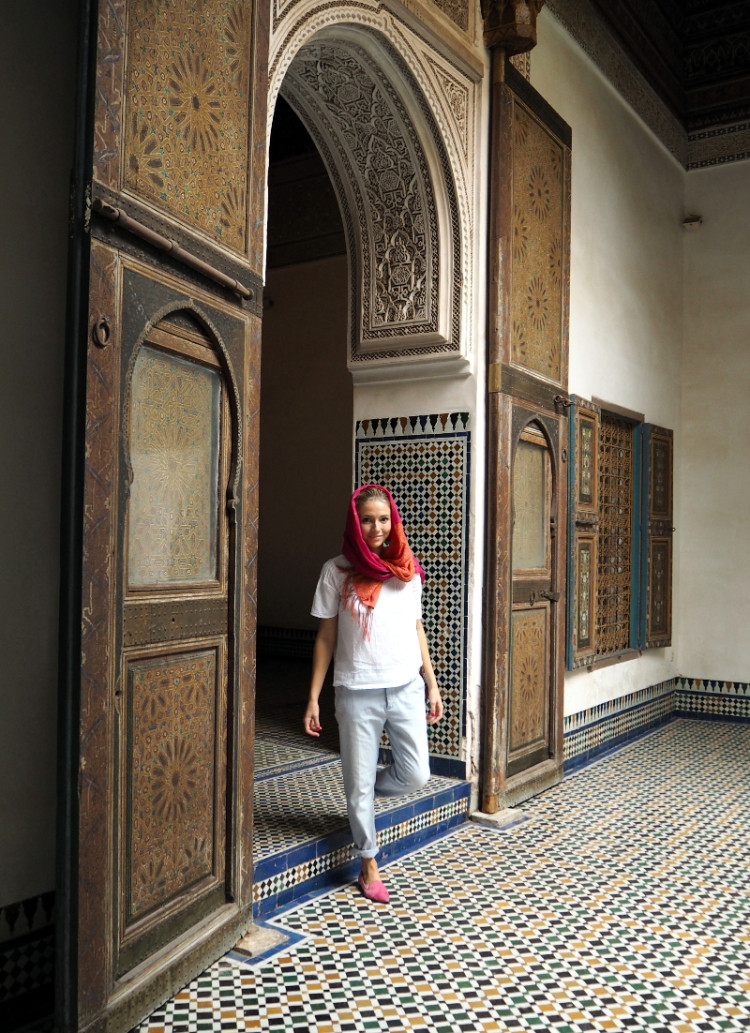 My favourite Marrakech past-times? Dodging scooters as you explore the souks and enjoying an evening at the Djemaa El-Fna – the main square to you and me. The spacious piazza comes alive at night with an unparalleled energy. Here you can join locals and sing along with Berber musicians, savour kebabs with Marrakech’s residents, watch snakes be enchanted and monkeys dance (although I have a few ethical issues with the latter) and jest with henna artists whose eyes peek from beneath swathes of dark fabrics. A tip: keep some coins/small notes spare to pay the musicians, actors and comedians (how’s your Arabic?) – it’s rude not to reward.  If eating in the square doesn’t take your fancy head to Le Salama for tagine, where you can sip a cocktail on the beautiful terrace, or Cafe Arabe for an ultra chic Italian-come-Moroccon fusion meal. 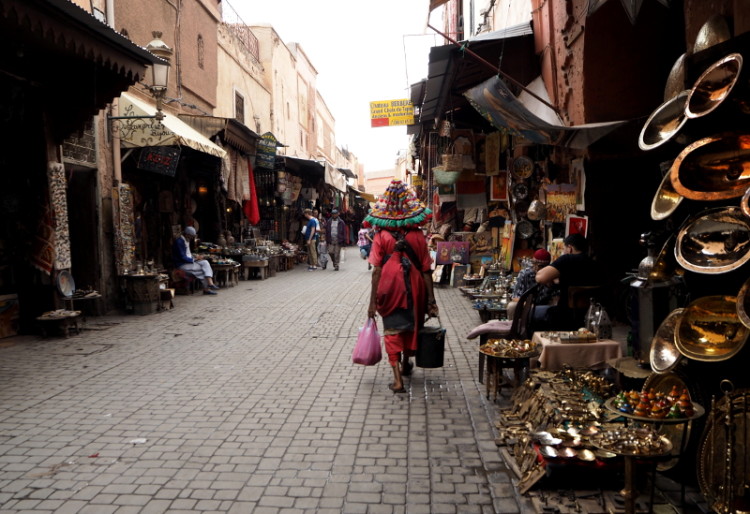 Other unmissable past-times include the Bahia Palace’s charming courtyards, the gardens surrounding the Koutoubia Mosque, Yves Saint Laurent’s stylish Majorelle Gardens , the Ben Youssef Madrassa and the Museum de la Fotographie that’s housed in a quaint riad setting. Accept that you’ll probably get lost on your way to the spots and have to part with a penny or two for someone to point you in the right direction, but hey that’s all part of the fun. 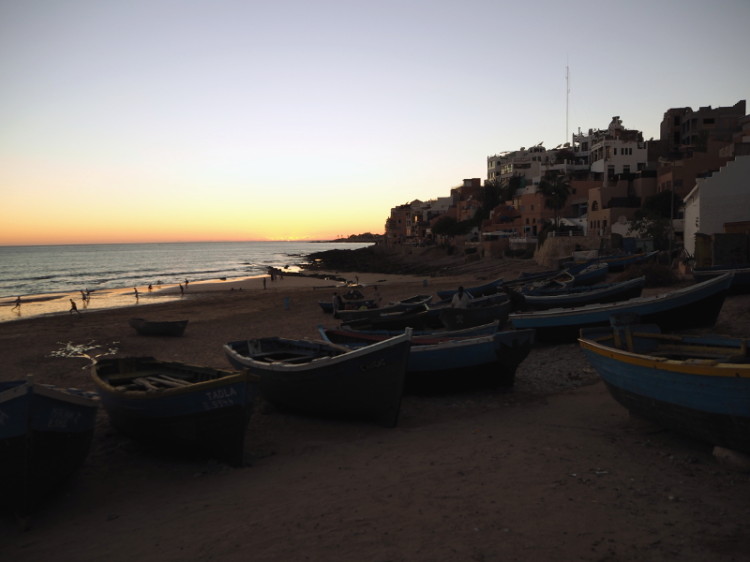 From Marrakech it was time for some R&R – well surf and yoga – in Taghazout. Forget transfers and hop on a local CTM or SupraTours bus, they’re far more comfortable than any taxi, and cost circa £8 one-way to Agadir, which is then a £15 taxi from Taghazout. I booked my “surf camp” with Surf Maroc, spending three days doing 9am to 4pm surfing and a daily sunset yoga session. Now I’m hardly sporty to say the least, but it’s hard not to feel invigorated by a trip of this nature. The accommodation is pretty basic (it’s a hostel after all) and Taghazout itself is nothing to write home about, but wow, is surfing fun. If you’re up for days splashing in the ocean, a yoga class or two, no booze – this is Morocco after all – and meeting some awesome travelling types from all over Europe, this is the place for you.

After I’d suitably tanned (uhum, burnt) all extremities that weren’t covered by a wetsuit, I decided it was time to spend my final days in Morocco embarking on a different type of adventure – trekking in the mountains. 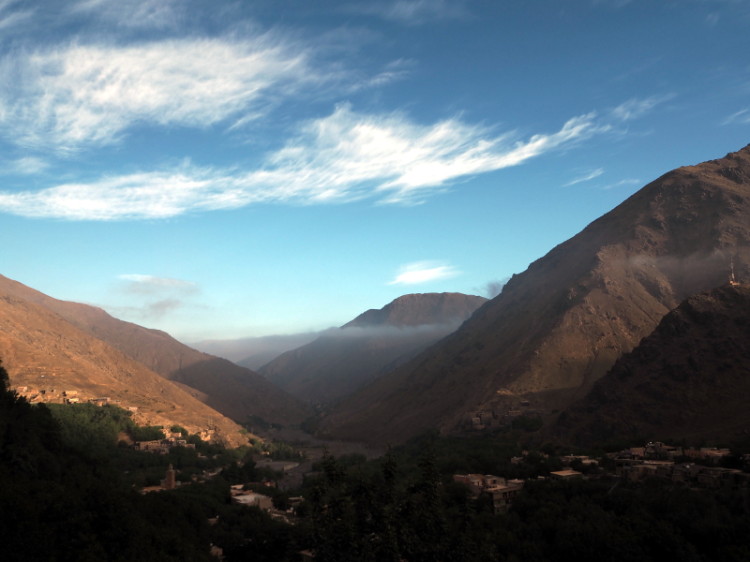 Jebel Toubkhal is the highest mountain in North Africa and it’s base in the high Atlas Mountains is only a few hours out of Marrakech on some rather sketchy roads that lead to Berber country. The landscape here is awe-inspiring. Think snow-capped mountains, cascading waterfalls, gentle streams surrounded by apple and walnut trees and charming local people. Of course, I hadn’t intended to hike so my trusty Russell & Bromley skates were my climbing attire – not really appropriate – but they faired me well on a six hour climb to the mountain refuge. I stayed at Kasbah Toubkhal, a stunning kasbah with lush gardens and views out to the mountains. A free hammam is included in your stay – basting yourself in mud is a pretty awesome way to conclude your day if you ask me. The owners of the Kasbah are dedicated to supporting local communities and ensuring that tourism to the area is sustainable – this is tourism with a conscience and I love it. 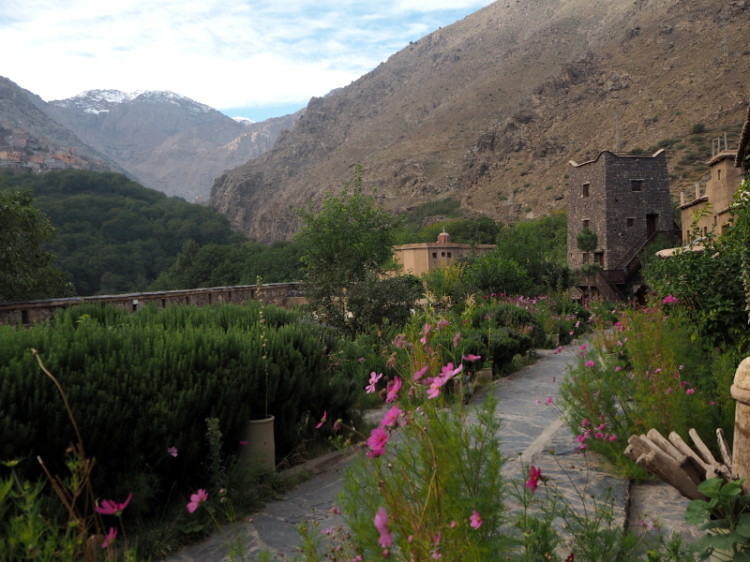 So there you have it. Three days of city, three days of coastline and a further three of mountains. I would loved to have visited Fez and the desert if time had permitted, but hey maybe next time. It’s a three-and-a-half flight from London – five and a bit from Stockholm – but it truly feels like you’re voyaging to somewhere totally different.

Moroccans are warm and friendly people, who made me feel welcome from the get go. You hear that it can be tricky to travel Morocco if you’re a blond, but I was greeted with nothing but kindness and warmth. Yes, people will try to sell you stuff, but pack a headscarf if you’re going to more remote places, cover your shoulders and legs  – and most importantly, smile. You won’t be able to resist it either. 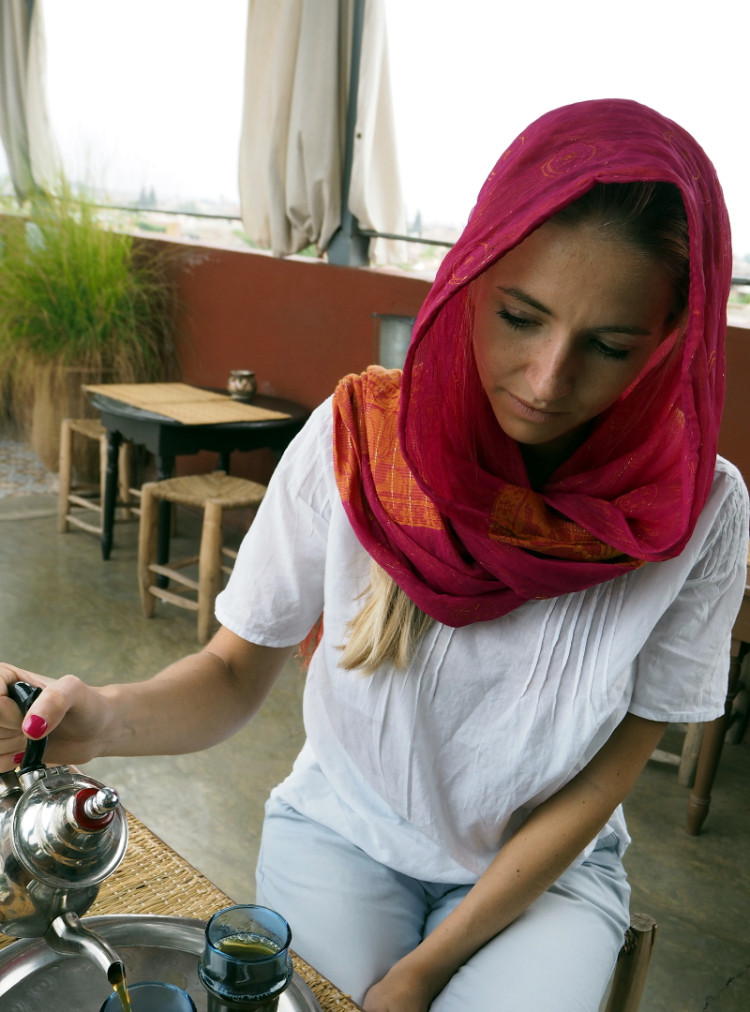 All shots taken on my Olympus Lite E-PL7 Pen camera.

Tags: Morocco, Travel
Share
Related news
Pauline Ström Gunnér of GRANDPA 8 years ago
How to Rock the Kasbah 8 years ago
110 Years of Art & Design 8 years ago
0 comments
Leave a reply