There’s something very special about viewing a designer’s menswear collection, and then soon after seeing what they have up their sleeves for the ladies. London Collections Men has given a fantastic platform for menswear, but as London Fashion Week draws to a close I find myself wishing I could see both the men and women take to the catwalk together (just once) for a complete look at the designer’s visions. At Burberry, several looks from the menswear LCM show were interspersed amongst the likes of Suki Waterhouse and Cara Delevingne, and it was refreshing to be reminded that Christopher Bailey has a vision for AW14 that encompasses both genders.

In light of this love for seeing the collections as a whole, I thought I would take the opportunity to revisit menswear whilst doing my womenswear roundup this season, and do so with a quiz – everyone loves a quiz right? If you’re coupled up, here’s how to identify the brand you should both be wearing – hey if the Beckhams can do it.

So you tell me, which British Fashion Couple are you?

You travel often to far flung destinations, yoga retreats, city breaks and luxury safaris. You speak five-plus languages between you, but London will always be your home. 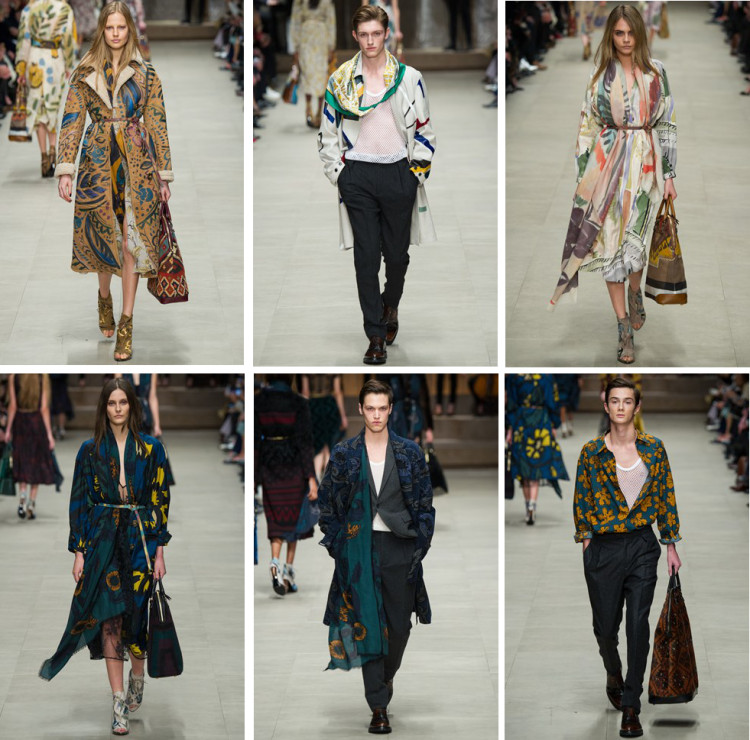 Burberry, for men and women alike, is all about loose and relaxed fabrics for AW14. For men, it’s slouchy tailoring with sumptuous silk shirts thrown on over sheer string vests, and for women floaty silks and lace dresses. The scarf, whether draped over a shoulder or loosely tied around the neck, is the accessory du jour – the oversized bag comes in close second. Hand painted florals for the ladies and swirling autumnal bouquets for the boys, are the intricately designed prints of Bailey’s creative direction. Women’s waists are cinched with thin, delicate belting and the female form is further accentuated with the womanly midi skirt. Luxurious sheepskin is the outerwear option for both sexes.

He works for the United Nations, you’re a photographer for National Geographic – you met on a trek through *insert out of the way destination*. Your shared abode runs off solar panelling and you grow all your own produce.

A Christopher Raeburn collection always comes with a political agenda, and for AW14 it centres around the Arctic (and its fragility). The polar bear mascot was to appear in both menswear and womenswear on knit sweaters and the womenswear jumper dress. Raeburn once again promoted his Remade philosophy with reconstructed Siberian officers’ winter coats that had been redesigned into roomy bear like outerwear. Intricate, Arctic themed prints appeared in womenswear, and bright colours were injected in to both collections – yellow for the boys, and a fiery orange for the girls.

You just came back from Burning Man, you’re Glastonbury veterans. You’re young and fresh faced (despite all those late nights) and both dabble in modelling/acting/singing/photography/coffee brewing etc. You live in Brooklyn/ Dalston/ Sodermalm/ *hipster hood of your choice* 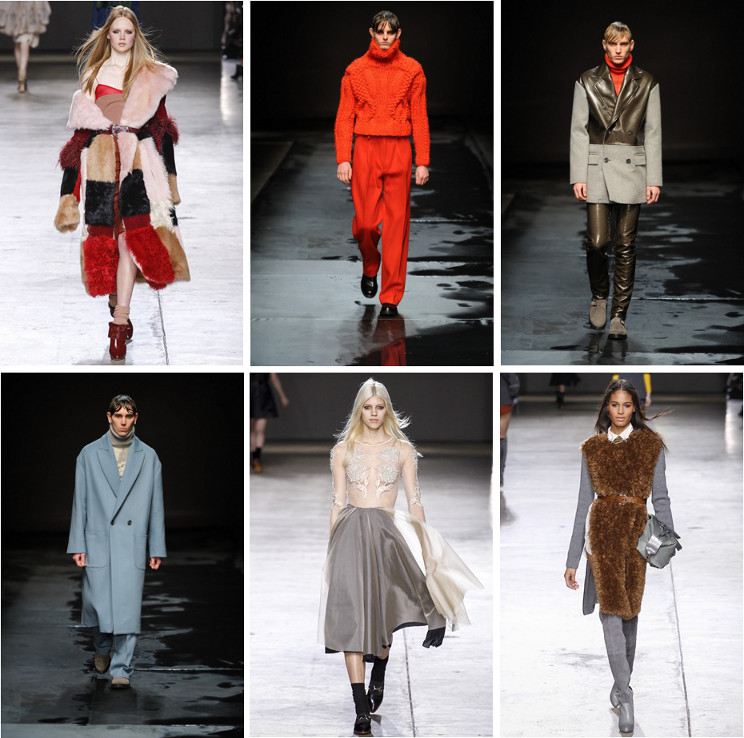 Topshop Unique and Topman Design always have a note of cool-kill rebellion to them. At Topman, we saw oversized outerwear drowning male models, whilst at Topshop coats were thrown on haphazardly, suggestively exposing shoulders. Both collections dabbled in knitwear, but the PVC of Topman Design was the fuzzy fake shearling of Topshop Unique. Romantic sheer fabrics and sequins offset an otherwise tomboy-chic mood at Topshop Unique, a far more playful look and feel than their male equivalents.

You long gave up your birth names opting for gender neutral alternatives. You both get told you look like Tilda Swinton, but you don’t see it. You direct plays but never read the reviews. 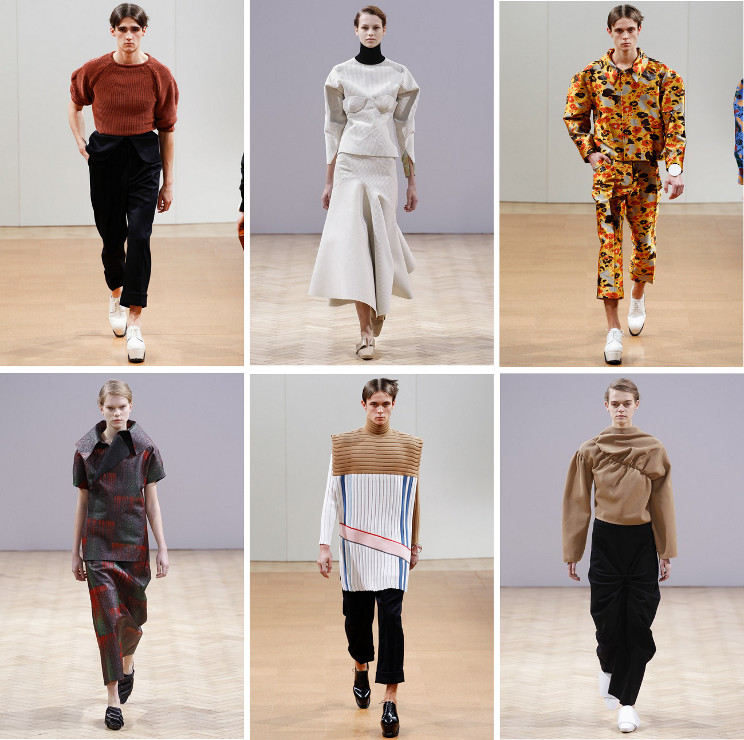 For a designer that sites creating dresses as one of his biggest challenges, JW Anderson certainly excels at designing them for men and women alike. Oversized sleeves, angular silhouettes and funnel necklines are the distorted shapes of AW14. Suspended hemlines on trousers and asymmetric skirts jut out to expose a heel for the gents and square toes for the women. Its all about the vertical line whether it appear in corduroy or ribbed knitwear, and the colour palette is neutral other than the occasional eye-catching print.

You could Harlem Shake, dougie and twerk before Youtube even got wind of it all. BB messenger is your lifeline, and every occasion calls for a #selfie. 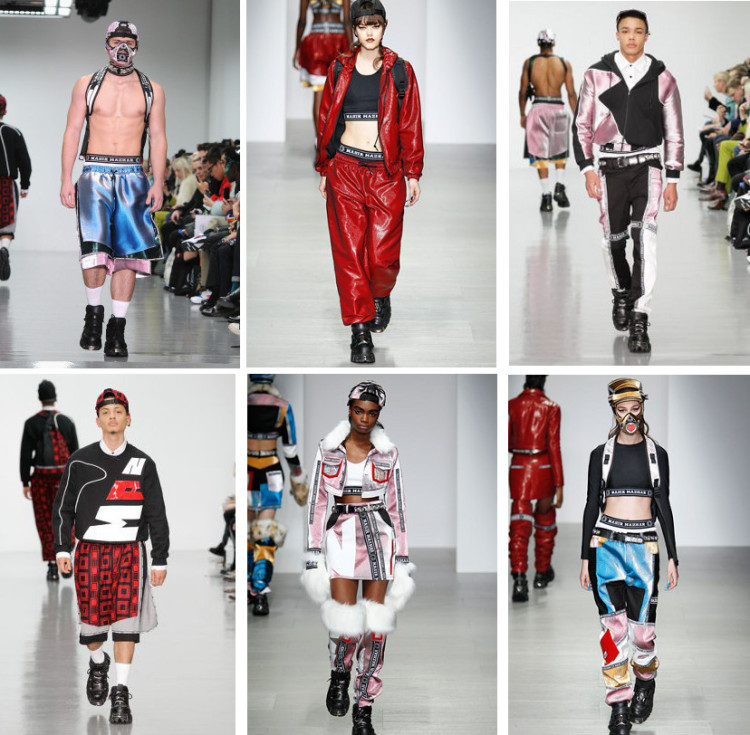 Nasir Mazhar’s gang are the rude boys n girls of Fashion Week. At LFW the girls wore thigh high, fur-trimmed boots and showed off exposed belly-buttons (piercing optional) with skin-tight crop tops. Low-slung track suit bottoms were layered over peak-a-boo boxers and as tight rucksacks were the accessory of choice for the school girl gang of models. The masculine uniform was similar – roomy basketball shorts, zip-up hoodies and sweats, and caps. This collection has “detention” written all over it.