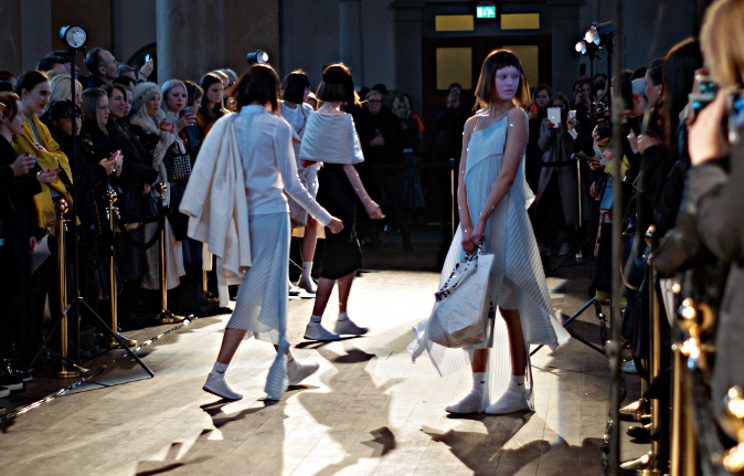 My first show of Stockholm Fashion Week was BACK, the brainchild of designer Ann-Sofie Back.

Ann-Sofie Back is somewhat of a Swedish fashion Demigod. She set up her own label Ann-Sofie Back in 2001, then launched BACK (her more affordable line) in 2005. In 2009 she became joint creative director of Cheap Monday (another of Sweden’s retail success stories) and somewhere along the way she also found time to edit several magazines and design a capsule line for Topshop – not bad, hey?

The Ann-Sofie aesthetic is an extreme, editorial one, and she is often referred to as spearheading the Swedish “anti-fashion” movement, so BACKs shows are always a bit “out there”. In a fashion calendar that tends to urge on the safe/commercial side of things, the BACK show is always an exciting interruption to the Stockholm Fashion Week diary.

Last season BACK’s models descended onto the catwalk from escalators in the storage room of a “Joe and the Juice”, this time, for AW14, the show took place in one of Stockholm’s picturesque churches. The show was totally immersive, with no seating, just members of the audience encircling an intimate catwalk where a pink-faced troupe of zombie-come-models flirted with onlookers. Bejewelled and crowned with choppy wigs (rumoured to match the designers own hairstyle), the models zig-zagged down the runway staring seductively at attendees in a way that is usually reserved exclusively for the photography bay. You couldn’t help but feel like the clerical setting was a tad inappropriate for the De Wallen themed choreography – but that of course is the idea. BACK loves us to feel a little bit uncomfortable with it all. 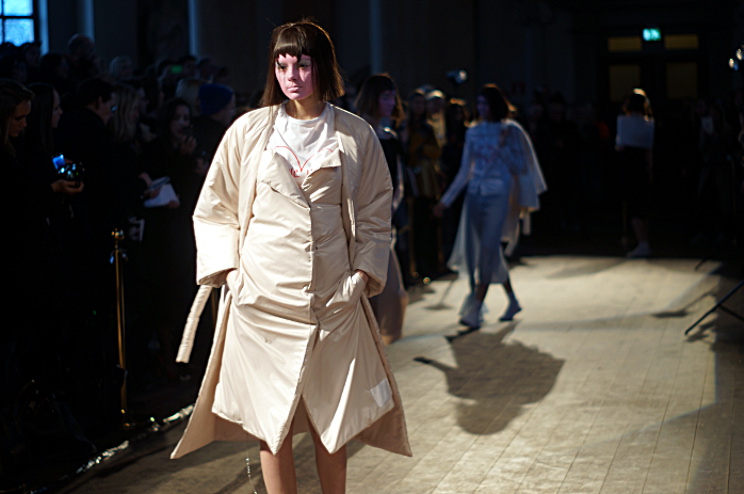 With sportswear at BACKs heart, the collections backbone was laid-back, slouchy garments, although this year tailored shirts and structured trousers were introduced to the line. Nike tennis socks were pulled over sneakers, and the brands signature BACK bags were tossed over shoulders in a carefree fashion. BACK never shies away from branding itself, so bag handles and shirts bore the designers name.  Ann-Sofie sited that she wanted the mood to be “naive”and “spontaneous”, which was expressed with knotting details haphazardly scattered on tees, trousers and tunics. The general look was relaxed, as if it had all been tossed together. Fabrics included velvet, chunky cord, paper fleece, lambswool and mini pleats in heavy wool, which feel in deconstructed hemlines and loose fitted layers. The colour palette centred largely around greys, chestnut brown, off pinks, a lovely ice blue and injections of red.

By no means a beautiful collection, it is one that will have the Swedish press hooraying in favour of the female designer pushing boundaries on her home turf. 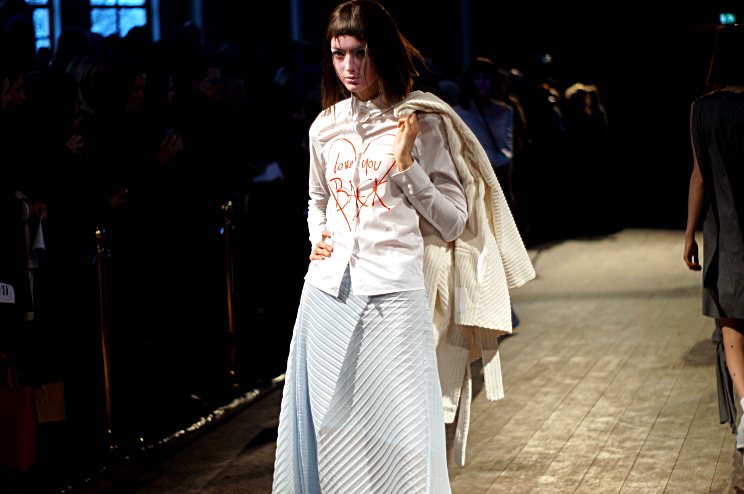